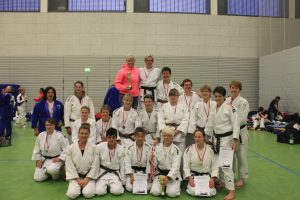 249 registered Judokas from 75 Judo clubs started at Luftfahrt Masters 2017. We broke our own record from 2015 (70 clubs). Also, the number of 261 starts towered over the launches of recent years. The battles were fought on 4 tatamis. The fighters came from 14 nations.
In the team ratings of the women of the open age group and over 30 group, the ladies of the JC Halle e.V. secured the golden trophy. Just behind it on place 2 of the Chemnitzer PSV e.V. In the over 40 group, the ladies of the Hennigsdorfer JV e.V. were at the top and JC Halle e.V. on second place.
The Spaniards of the Master Team Cordoba were excellent for the men over 30 and over 40 and took two first places. In the open age class stood two newcomers in the first place, the Swedes from Judo Sundsvall and the Poles of JS Koch. Most of the starters brought the Austrians, as in previous years, the SV Gallneukirchen and could secure thanks to good performance in the over 50 the team Cup.
In the below 18 of the girls the SV Luftfahrt Berlin e.V. won the first place in a sovereign manner and thus won the Team Cup, the boys made it to second place. The boys from PSV Ribnitz-Damgarten e.V. stood on place 1.
The age groups over 30 / over 40 / over 50 / open  with the weight classes -81kg, -90kg and -100kg were strong occupy this year, with nearly 10 starts in each class. Also with the ladies in all age groups 66 participants could be seen this year.

Despite the high number of participants, the tournament could be carried out without much delay. The increasing number of judoka among the ladies was also pleasing.

In own thing:
On Sunday the 26.11. The DAN exams took place from Berlin. Niklas, Alex (both now 1. Dan) and Daniel (now 2. Dan), who were still part of the organization team at Luftfahrt Masters, joined the board of examiners and were able to convince them of their achievements and received their new DAN. Congratulations!

This website uses cookies to improve your experience while you navigate through the website. Out of these, the cookies that are categorized as necessary are stored on your browser as they are essential for the working of basic functionalities of the website. We also use third-party cookies that help us analyze and understand how you use this website. These cookies will be stored in your browser only with your consent. You also have the option to opt-out of these cookies. But opting out of some of these cookies may affect your browsing experience.
Necessary immer aktiv
Necessary cookies are absolutely essential for the website to function properly. These cookies ensure basic functionalities and security features of the website, anonymously.
Functional
Functional cookies help to perform certain functionalities like sharing the content of the website on social media platforms, collect feedbacks, and other third-party features.
Performance
Performance cookies are used to understand and analyze the key performance indexes of the website which helps in delivering a better user experience for the visitors.
Analytics
Analytical cookies are used to understand how visitors interact with the website. These cookies help provide information on metrics the number of visitors, bounce rate, traffic source, etc.
Advertisement
Advertisement cookies are used to provide visitors with relevant ads and marketing campaigns. These cookies track visitors across websites and collect information to provide customized ads.
Others
Other uncategorized cookies are those that are being analyzed and have not been classified into a category as yet.
SPEICHERN & AKZEPTIEREN