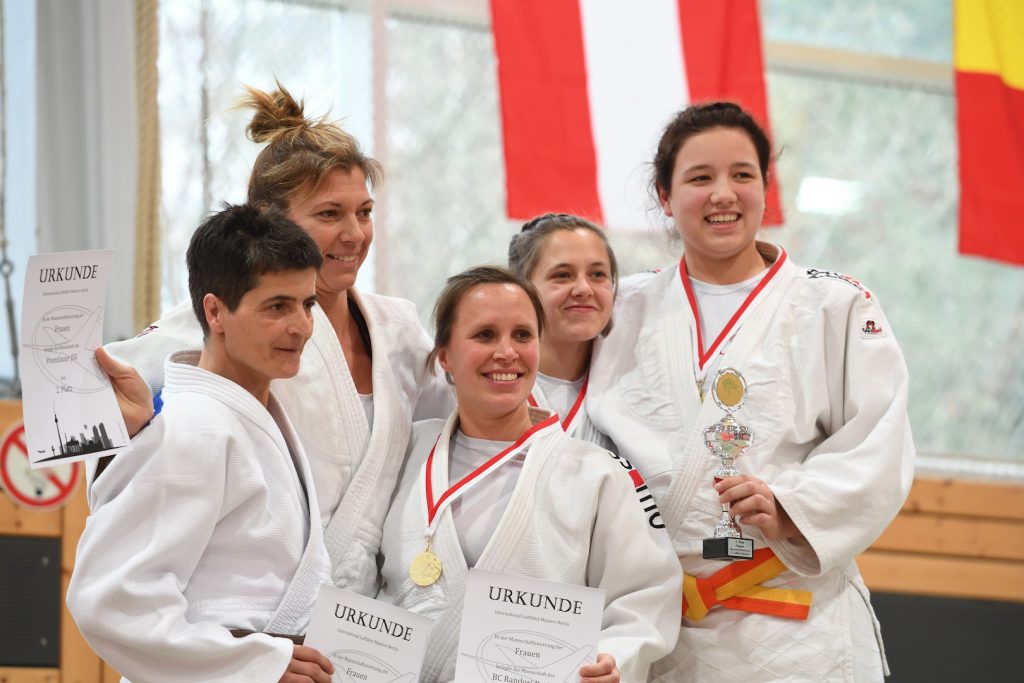 With 166 start-up registrations, including doublestarts, from 62 clubs, the Luftfahrt Masters was well-done organized and, as in the previous years, at a high level. As in the previous year, all fights were played on three tatamis in the gym in the Uranus street. Not so strong were the Berliners this year (only 13 clubs), because on Sunday DAN examinations were planned and the Ukes and Toris had to spare.
There were 28 teams from 10 national associations. For the first time the BSG Berliner Feuerwehr e.V. (Berlin), Aachener Judo Club 1953 e.V. (NRW), FC Schweitenkirchen 1946 e.V. and TSV Abensberg e.V. from Bavaria, Judokan Schkeuditz 2000 e.V. (Saxony), Judoschule Falkensee e.V. (Brandenburg), Kodokan Erfurt e.V. (Thuringia), PSV Magdeburg 1990 e.V. (Saxony-Anhalt), SG Schwarz-Weiß Oldenburg e.V. and SV Eintracht Wiefelstede e.V. from Lower Saxony.
One third of the participating teams came from the international arena, making up 21 teams. For the first time we had participants from Senegal, Syria and Israel. By sex, the men still dominate here. Only 23 women participated in the tournament this year.

Single evaluation
The Veterans World Cup in Florida, a week earlier, was also felt at the Luftfahrt Masters. Some of the World Cup participants, who normally were traveling to the Luftfahrt Masters in Berlin, still stayed in the USA. The reigning German Champion M4 + 100 kg Jens-Peter Bischof of the BC Randori and Guido Baar of the SV Motor Babelsberg e.V. showed themselves unimpressed by the jetlag and full of fighting lust. Both proved why them went to the Veteran World Cup. In the over 40, this year’s Veteran World Cup third Jens-Peter won the 1st place in the +100kg category and in the 73kg class, the Veteran World Championship ranked 9th Guido got the gold medal. The reigning German Vice Champion M3 Oliver Makowiak of the Pasewalker Judosportverein e.V. won the first place in the over 40 up to 66kg. 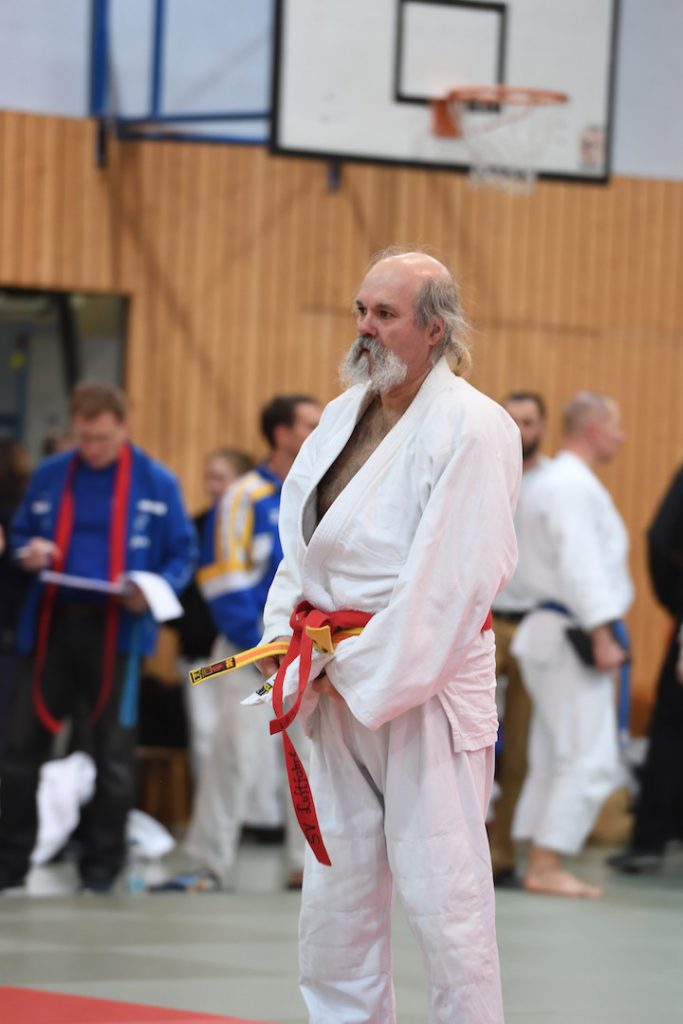 The over 30 competitors, the two Berliners Jan Wabnitz from KiK e.v. and the reigning German Champion in the M2 Steffen Mankiewicz from SC Lotos e.V. kept the gold in Berlin. Jan completed his Hattrick perfectly and defended his two titles from 2014 and 2015 in the strong participant field -100kg. Steffen, EM Veterans fifth placed in 2015, continued his series and secured himself after 2012, 2013 and 2014 again the first place in the class up to 66kg. In 2015 he was in absence, because of successfully second DAN examination.
In the over 50 category dominated the fighters of the newcomer from Poland Flota Gdynia. There were three fighters from the classes -81kg, -90kg and + 100kg on top of the winner stairs. With the light-weight up to 66kg Michael Traus of the JC Bad Belzig ’93 e.V. had the gold medal around the neck. He was on the winner’s podium from 2011-2014 and is currently German Champion up to 60kg in the age class M7. Since 2015 Jörg Rennhack from the PSV Ribnitz-Damgarten e.V. continues the series and claimed against Michael Traus in the direct fight. Place 1 for Jörg and place 2 for Michael in the over 50 at the Luftfahrt Masters 2016 in Berlin.
This year, no women’s from Veteran WM in Florida were represented at the Luftfahrt Masters Berlin 2016, but a Europe Vice Champion of Veterans 2016 in the over 30 up to 57kg, Anita Sprenger. Did the reigning German Champion in the F4 Anita Sprenger of the JC Arashi Dresden still the triple in 2012 with three first places in the 63kg class, it was still a double in 2014 in two second places in the open age class up to 57kg and up to 63kg. In 2016 it was after all still the first place in the open age class up to 57kg. In the over 30, Anita then had to beat the German Vice Champion F1 Lena Fischer from the DJK Süd e.V. up to 57kg and moved to 2nd place. 1st place for Lena in the over 30 class up to 57kg at the Luftfahrt Masters 2016, coach and currently German Champion in the M1 to 60kg Paul Dämpfert was visibly satisfied. Fought Oda Weighart from the 1. Mannheimer Judo Club e.V. still in 2014 in the over 30 up to 57kg, she rised up to the over 40 category in 2015 and took the gold medal in her age and weight class for the second time in a row in 2016.

Team evaluation
The Poles of Flota Gdynia pushed the winners of last year in the over 50 category JSV Bernau e.V. from the winner stairs and and 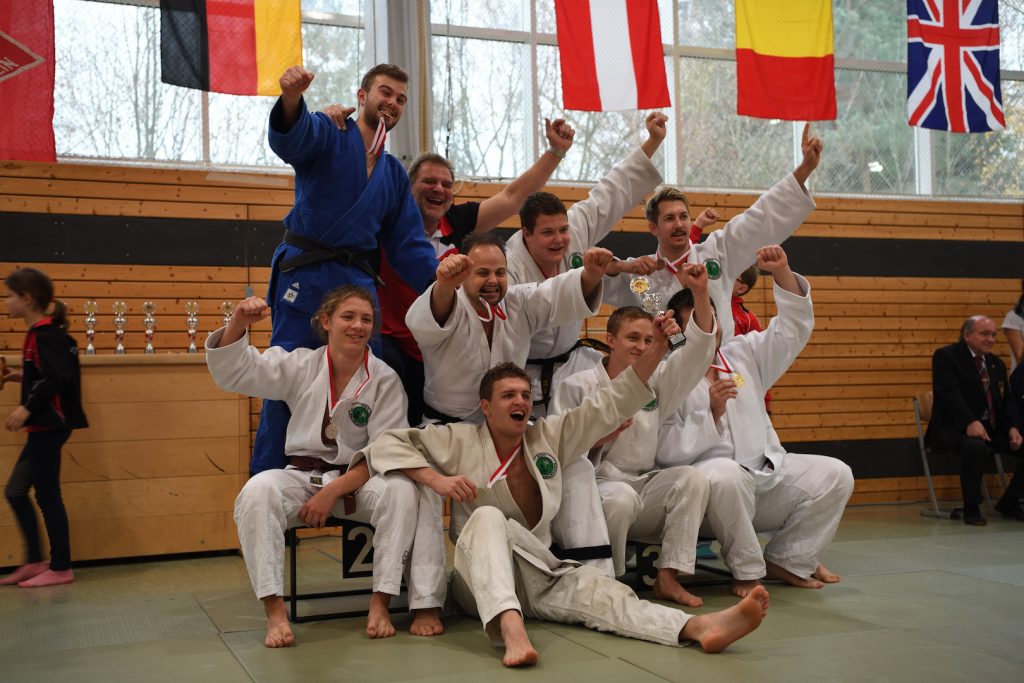 took the victory in this team ranking. BC Randori Berlin also won for the first time the team ranking of the men over 40 and women over 30. For the men in over 30 category, the Polish team from AZS UAM Poznan winner in 2015, in 2016 another polish club managed to take the team pokal home with them, congratulations to Tomasz and his team from JV Gwardia Koszalin. In the open age class of the men, the SV Gallneukirchen from Austria after 2012, 2013 and 2014 allowed the team cup in 2016 again its own. The women of the 1. Berliner Judo-Club Märkisches Viertel 1968 e.V. were also able to look forward to the team cup in the open age class. In the below 18 age class of the boys was the PSV Ribnitz-Damgarten e.V. first, just like Jörg Rennhack in the over 50 age class. Among the girls of below 18, the SC Charis 02 e.V. won the team cup.

On our own behalf
Also Judoka of the SV Luftfahrt Berlin e.V. took part in the court tournament. In the balancing act between table occupancy, list management and competition, our fighters showed very good performance both in organization and in sporting activities. With the girls below 18 Eliza Zacharias made a double start at her first competition on the Luftfahrt Masters and was able to successfully defeat her two opponents in her weight class up to 57kg and secure her first place. On the other hand the opponents in the higher weight class up to 63 kg were more difficult. In exciting battles, however, she finally won the third place with a great performance. 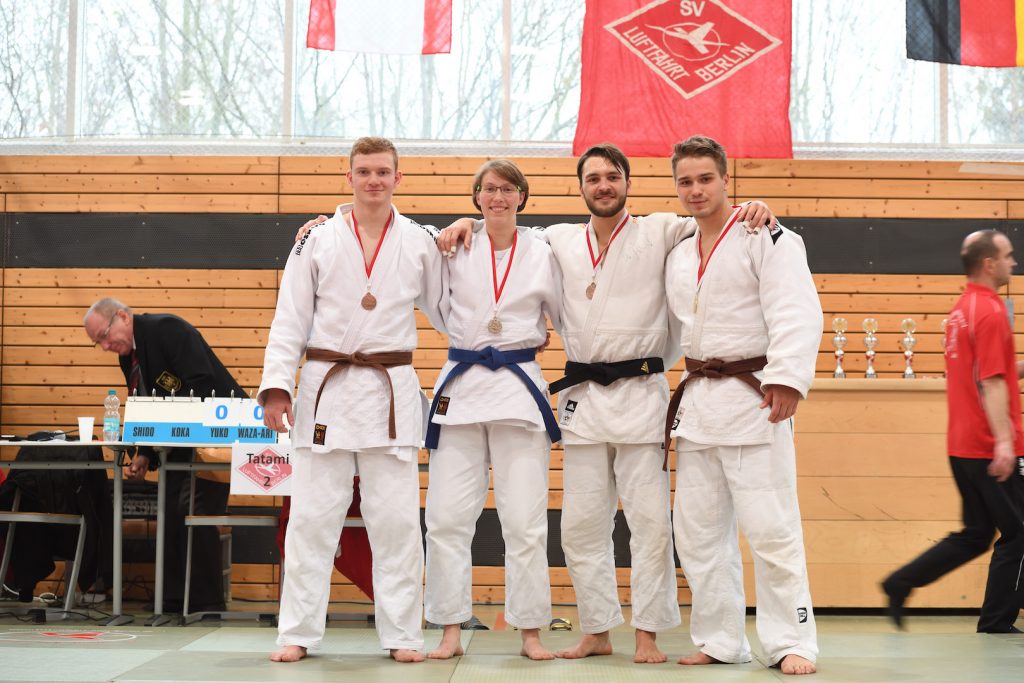 For the strong offspring of Judoka Leon Fink, it was already the sixth Luftfahrt Masters in a familiar environment. 2011 from the weight class up to 43kg, 2012 up to 46kg, 2013 up to 55kg, 2014 und 2015 up to 73kg, Leon started first time in the 81kg weight class this year. From 2011 to 2013, he always went home with gold in his weight class. Even with the double starts in higher weight classes he could always place himself among the best 3. 2014 to 2015 the level increased however with the below 18 and Leon could only place 3rd. In his new weight class, he was again able to take the first place this year. We are curious about how he will be in the open age class next year. Maybe then also in the weight class up to 90kg … who knows?!
For his big brother Niklas Fink it is already the third year in a row in the open age class up to 81kg. This category is usually high and heavily occupied on the Luftfahrt Masters. In his first year in the open age class, Niklas was still the third place. This year, he has asserted himself sovereignly against the strong Poles and Austrians and earned the first place for it. Alexander Scholz and Ivo Stoiberg were also able to climb the podium in order to get the bronze medal in the open age class up to 73kg. Congratulations and sincere thanks to all Luftfahrer for the super-displayed performance on and beside the tatami!

Conclusions
Despite the smaller number of participants this year, the weight classes up to 73kg, up to 81kg and up to 90kg were classed as high-class in every age class. There was also a lack of internationality, although there were slight language difficulties if one could not communicate in German or English, but the origin, religion and language did not play a role on the tatami, but only the performance and the fair coexistence 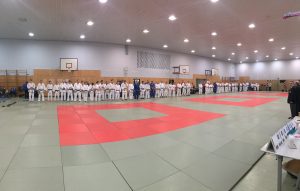 … as Jigoro Kano once taught with his Judo values. The proportion of female judoka has been constant with 20-30 since 2011, but a higher number of participants could increase the level and the fun. May in 2017?! In 2017, we hopefully have our old venue again, where we can let the battles be carried out on 5 tatamis and give spectators more space and better visibility on the stands. Overall, the tournament went according to plan and ended in time. There were also not serious injuries this time. The Juan Pedro Lechuga from Judo Master Cordoba, who had to be treated by the emergency physician, was briefly taken to the hospital with a shoulder spinal joint dislocation shortly acromio clavicular, but was able to leave the hospital on the same evening and start his flight on the Sunday on time. In consultation with his team colleagues Juan is now in good health and has to calm his arm in the next weeks before he can get back on the mat. We wish you a good recovery and say congratulations to 4th place. 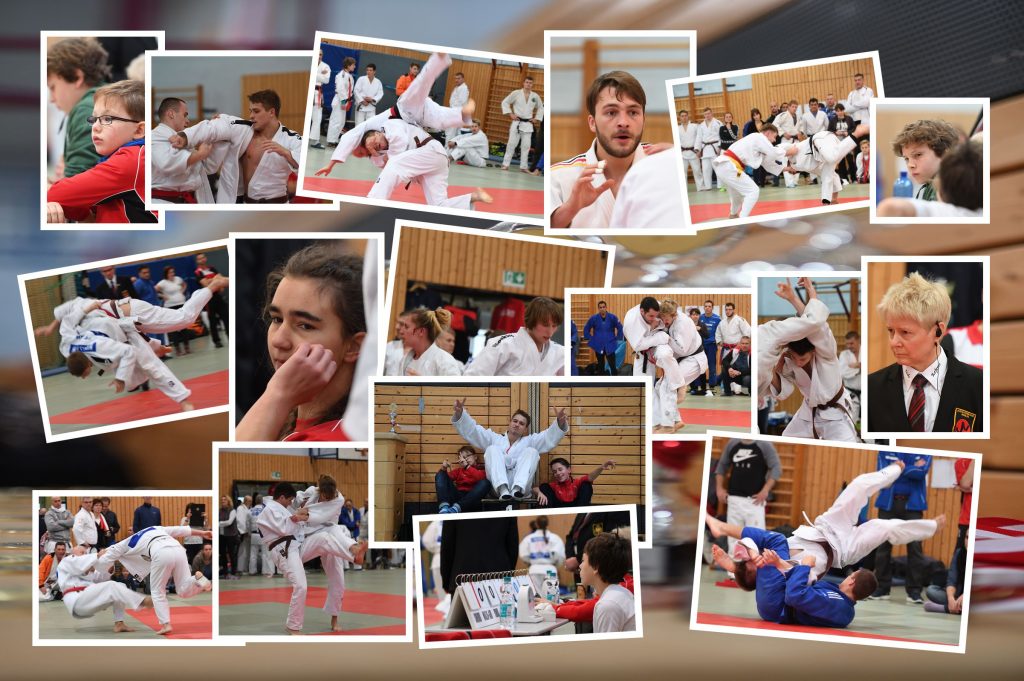